Today, I want to address another of the most frequently asked questions I get:

“I found this great looking soap recipe on the internet, but it includes palm oil. How can I make it palm free?”

(A related question I get is: “What’s wrong with using palm oil?” That’s something of a hot button topic & not really the focus of this post, but some reasons why I decided to stop using it can be found in this article at Rainforest Rescue. I encourage you to research both sides of the debate and develop your own opinion.)

Before we can substitute a new oil for palm in a recipe, first we have to know why it’s there and what it lends to a finished bar of soap.

Palm oil is a “hard oil”. That means that it makes your bar of soap harder. It’s not very bubbly, but does help contribute to a stable lather. Other “hard oils” include tallow, lard, cocoa butter, kokum butter, and shea butter. Coconut oil will also make for a hard bar, with fluffy lather to boot, but it will most likely already be in the recipe.

LEARN TO USE HERBS & FLOWERS IN SOAP

Subscribe to Soap Tip Tuesdays and I’ll send you my quick start digital guide to Using Herbs & Flowers In Soap. Each Tuesday, you’ll receive one of my best natural soapmaking tips, recipes, or printables. 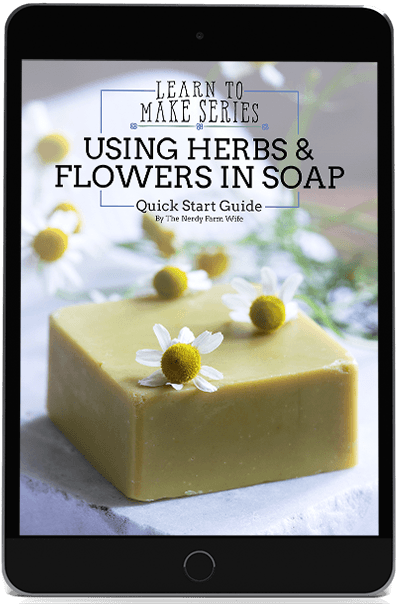 Option 1 – Substitute with a similar oil/fat

Tallow/Lard: You can substitute this in direct proportion for palm oil; using up to 25 to 35% in a recipe. Some may dislike the use of tallow or lard in soap, since they are animal byproducts. On one hand, it’s good stewardship to use something that would normally be thrown away. On the other hand, it’s not compatible with the beliefs of vegans and some religions. My main hesitation with using it is because often antibiotics and other toxins are concentrated in the fats of animals. In the past, I had a hard time sourcing it, but now we raise our own pastured animals so I’m 100% sure of their clean diet and living conditions and that they were treated respectfully.  There are other vegetable-based alternatives though, if you wish to avoid all animal products.

Cocoa or Kokum Butter: Makes a hard bar with a creamy lather. If you use more than 15% in a soap recipe, keep an eye out for potential cracking. (This has not happened to me, but have heard of a few times from other soapers.) I like to use the unscented version of cocoa butter, since I don’t want the scent to carry through to my final soap. If you enjoy the unrefined scent though; you can use it just as well. (Or unrefined cocoa butter + peppermint and/or coffee essential oil is a great combo too!)

Shea Butter: Moisturizes and nourishes the skin. It will add some hardness, not as much as cocoa butter, but still a very nice overall feel. Aim for maybe 10 to 15% in a recipe.

Coconut Oil: If coconut oil is already in your recipe, you probably won’t want to add more. A general guideline is to keep the amount under 25 to 30% of the recipe or it might start to dry out your skin. (Though I have gone over that amount and added extra moisturizing oils and superfat to compensate.)

Babassu Oil: This has similar properties as coconut oil. (It can be used as a direct substitute for coconut oil as well, if you’re allergic.)

For this example, I’ll use an adaptation of one of my old cucumber soaps.

The recipe, with palm oil, reads:

Go to a lye calculator and enter the number of ounces next to each oil’s name (so a “3” in the box beside avocado oil and “10” in the box beside coconut, 19 beside olive oil, and 8 beside palm oil), then hit “Calculate Lye” at the very bottom.

You can use all vegetable oils in your soap recipe, and still get a good bar of soap. The main thing to keep in mind is that it may take a little longer to firm up in the mold and may need a longer cure time to get a hard bar. (Though there are a few tricks we’ll talk about, to speed things up.)

A basic ingredient in most soap recipes is olive oil, which is a “soft/hard” oil. It starts out very soft, but will eventually cure to very hard. You can make soap with up to 100% olive oil, so whenever I need a filler in a recipe, I use that.

The problem with olive oil is that it doesn’t offer much lather. To help with that, I make sure to have coconut oil (gives great lather) and/or castor oil (boosts lather) in the recipe as well.

Let’s go back to my old cucumber soap recipe and change it a different way.

The recipe, with palm oil, is:

This time, instead of swapping the palm oil directly with tallow, lard, or another “hard” oil, we’re going to use softer oils.

Let’s go back to the lye calculator  and re-enter the number of ounces next to each oil’s name (so a “3” in the box beside avocado oil and “10” in the box beside coconut, 19 beside olive oil, 8 besides palm oil), then hit “Calculate Lye” at the very bottom.

You’ll get the same result as before, that looked like this:

To make changes, use the “Edit Recipe” button at the bottom of the page. Again, we’ll erase the “8” from beside Palm Oil. But, what will we use to make up for those lost 8 ounces?

One idea: You can just add 8 more ounces of olive oil, but in that case, you’ll end up with a bar that is 67.5% olive oil. That’s not a bad thing per se, but once you begin going over 50% olive oil, it starts taking longer and longer for your soap to harden. (It will though, you just have to be patient!) That much olive oil may lather less than you’d like it to, as well.

Another idea: Castor oil helps boost lather. You could take the 8 ounces from palm oil and put 2 ounces in castor oil and 6 ounces to more olive. It would look like this:

Yet another idea: That’s still a lot of olive oil though! You could bring in a new oil, such as sunflower, and add it to the mix. Looking at the soap chart, we see that sunflower oil adds a silky lather. Too much makes your soap soft though, so try to keep it under 15 to 20% of your recipe. You could take the 8 ounces from palm oil and put 2 ounces of it in castor oil, 4 ounces in sunflower oil and the other 2 ounces back in olive oil. That would look like this:

You don’t have to use sunflower oil. You could use hemp oil, meadowfoam oil, sweet almond oil, and even more avocado oil instead. You have lots of options!

Palm free soap tends to be on the softer side at first. Mainly, you need to give it more time in the mold and more time curing than you might other recipes. A few other tips that might help:

So, those are my tips for making palm free soaps, but there’s always more to discover! For lots of my favorite palm free recipes, tips on naturally coloring soap, and more, then check out my Handmade Natural Soaps eBook Collection!